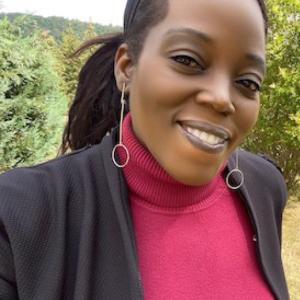 That would stand on the doorstep of my mother. She’s an educator who always encouraged me to explore, buying me my first science encyclopedia at seven, and chemistry set with a magnifying glass that I accidentally used to start a fire in my backyard. At eight, I remember asking my mother how fruits were preserved in a can. Not knowing anything about the process, she dropped me off at a cannery and instructed me to write a report for her on how it’s done. In high school, I entered science exhibitions and as a biochemistry undergraduate researcher at the University of Massachusetts, Boston, I was exposed to a dynamic range of research environments which included everything from genetic manipulations of fruit flies and plants to synthetic organic chemistry.

When I began researching graduate programs, I was looking primarily in Massachusetts and New York but considered Duke after speaking with a representative from Graduate Student Affairs at a grad school symposium in Boston. Every few months, they sent me an application package and I was eventually invited for a campus visit to speak with biochemistry’s faculty and students. I was attracted to the department’s open-door policy, their amazing science, and the fact that a Duke PhD would give me a strong background in structural biology—an area where the Biochemistry Department really excels. Duke was a natural fit for me.

Scientifically, it’s visualizing biologically relevant enzymes in their native state in pathogenic bacteria and figuring out how they work, connect, and communicate, then applying this information to infectious disease therapies. I want to use this information to design relevant drugs, answer mechanistic questions, or reveal something novel in how microorganisms function.

Actually, I recently moved my research program from the Institut Pasteur to the University of California San Francisco (UCSF) and on September 1, became an Assistant Professor and Chan Zuckerberg Investigator in the Department of Cellular and Molecular Pharmacology.

My research program is primarily focused on studying highly complex macromolecular machines inside bacterial cells, dissecting them, and learning how they communicate, then leveraging this information to address the current global threat of antibiotic resistance. Bacteria use various machines, sometimes comprised of 40-50 different protein members that channel information from their extracellular environment to generate a proper survival response.  Historically, we’ve mostly focused on studying these machines in isolation, but recent studies have shown that these large cellular structures are connected in networks consisting of protein-protein interactions. I’m interested in the cross-talk or ‘secret conversation’ that occurs in these networks because if you understand how these machines communicate throughout biological systems, you can disrupt their interactions rather than target individual machines, which is how current antibiotics work. In other words, inactivating several machines simultaneously reduces the likelihood of antibiotic resistance, rather than disabling the function of a single machine that bacteria can overcome through generational mutations. My model system is bacteria, but the fundamentals of cellular communication are also relevant to molecular machines of higher organisms, whose malfunction has been implicated in pathologies ranging from neurodegenerative diseases to different cancers. What I’m doing is mechanistically and technically challenging, but very rewarding.

Duke has given me a pretty healthy alumni network. Faculty, trainees, and administrative staff have supported me personally and professionally and many of my contemporaries are now leaders in academia and industry. Recently, I contacted a classmate I knew would have some bioorganic chemistry notes that she didn’t hesitate to share. In fact, this collaboration exemplifies Duke Biochemistry’s culture.

Science can be a very isolating and competitive environment, but at some really good places, it’s not. At Duke, we were like a family from which I have extremely positive and productive memories. We helped one another prepare for preliminary exams and read each other’s manuscripts and research proposals. I learned from graduate students in other laboratories and our scientific discussions definitely impacted my work. There was always an overarching feeling that we were in it together.