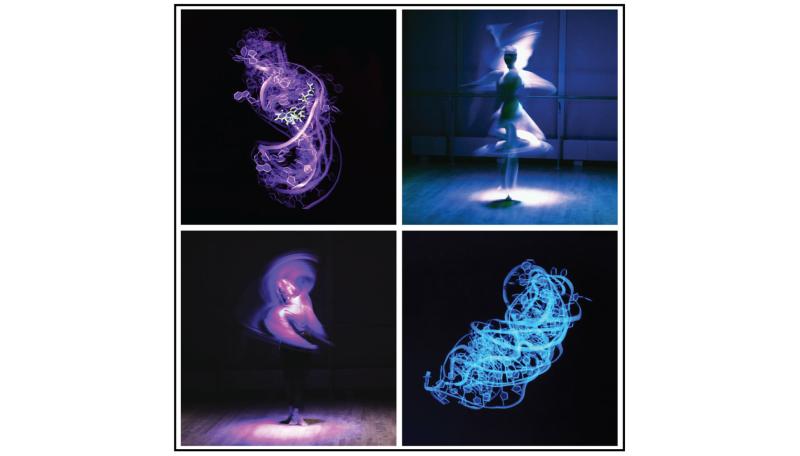 Unbeknown to most, artists and scientists actually have a lot in common—they both labor over creating the visual representations of their work.

This year, three Duke researchers Megan Kelly (current Biochemistry PhD student), Laura Ganser (2019 Biochemistry graduate), and Henry (Yu) Xu (2021 Chemistry graduate), all from Hashim Al-Hashimi’s Lab, won the RNA Society’s 2021 inaugural art and music competition for their photograph that used a long-exposure photography technique. A version of their photo was previously created for “Art of a Scientist,” a Duke exhibit that makes science more accessible to the general public and tries to dispel the myth that scientists aren’t creative.

Xu, Kelly, and Ganser took long exposure photographs of experimentally-derived movies of HIV RNAs TAR (purple) and ESS3 (blue)—a technique that allowed them to capture multiple motions in a single image. Kelly and Ganser, who were both dancers in their youth, then applied the same technique to themselves while ballet dancing. In its final form, the ballet photos were placed next to their corresponding RNA, capturing the dynamic motion of the dancers/scientists and the RNA molecules they study.

Classically, biomolecules are often rendered and thought of as a single rigid structure. But in reality, these molecules rapidly undergo dynamic changes that allow them to sample many different conformations and “dance” throughout the cell. Al-Hashimi has spent years capturing the shifting shape of RNA. “Hashim's early career involved developing techniques using nucleate nuclear magnetic resonance spectroscopy (NMR) to actually show the motions of RNA. Instead of having a single picture of one structure, he actually made movies of how the RNA moved in time and the shapes they adopt. So a big part of his work is thinking of RNA as a dynamic and not rigid structure,” said Kelly.

These photographs are meant to capture the complexity of that motion. In addition to appending the classic view that molecules are rigid, on a scientific level, these images help understand biology at a deeper level and enable applications in drug discovery. The two RNAs are drug targets in the human immunodeficiency virus (HIV), and the researchers are studying their dynamics to understand their structure-function relationships in the cell and to design anti-viral small molecule drugs (shown in the upper left image in green).

Al-Hashimi was very supportive of his researchers’ creative endeavor. "I think it's important to encourage trainees to find creative ways to express the beauty they see in their science,” said Al-Hashimi. “Not only is there lots of inherent beauty in science which we should celebrate, scientists can use aesthetics to guide their work. This example from Megan, Laura, and Henry was just stunning!"

The idea for this piece and the photography techniques were designed and executed by Megan Kelly, Laura Ganser, PhD, Henry (Yu) Xu, PhD, and Hashim Al-Hashimi, PhD.