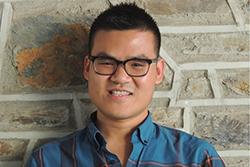 “I never imagined myself studying cell biology,” Duc Huynh said, looking back at his first-year rotation in the Boyce Lab. Coming from a structural biology field, he had no prior experience with this research. Yet, he began to see the value in studying post-translational modifications (PTMs), the enzymatic modification of proteins following biosynthesis. He was particularly interested in the field of glycobiology because of its complexity but Huynh wanted to take a slightly different approach—he wanted to marry O-GlcNAc, what the Boyce lab studies, with his interest in neurobiology. There was one hitch, the Boyce Lab didn’t study the brain. He thought convincing his PI, Mike Boyce, PhD, Associate Professor of Biochemistry, would be a challenge, but to Huynh’s surprise, he was very supportive and encouraged him to pursue this line of research.

Huynh finds the brain fascinating and even took a Coursera in medical neuroscience when his lab closed during the pandemic. He says, “The brain’s a mystery that drew me in. It’s arguably one of the most important organs, but studying it is a challenge, and because there are many complex processes involved, research from any discipline would be insightful.”

Ever the ambitious young scientist, Huynh knew it was important to hone his grant writing skills, so he decided to apply for the Ruth K. Broad Foundation Fellowship. On the positive side, it’s one of the few available to foreign students, on the negative, it’s typically awarded to studies examining the underlying mechanisms of nervous system diseases. Huynh didn’t think he had a chance.

Before Huynh could start crafting his message for the application, he had to determine why he wanted to investigate glycobiology, a niche field in cell biology. His PhD training had given him the tools to answer “what” research problems and “how” to address them, but not “why.” Huynh’s proposal included elucidating the regulation of neurofilament light (NF-L), a neuronal cytoskeleton that structurally supports axons and is mutated in a subtype of Charcot-Marie-Tooth disease, an inherited neuromuscular disease where the patient’s distal limb muscles start to atrophy, causing loss of mobility and paralysis in severe cases. In his research, Huynh will look at how O-GlcNAc modification, an intracellular type of glycosylation, affects the biology of NF-L at the molecular level. His study aims to provide biochemical and cell biological insights on this PTM and inform future efforts to detect and rationally manipulate O-GlcNAc changes in human brain diseases.

Behind every great scientist is a great mentor, and it took the help of Boyce and many iterations before Huynh was able to write a clear, succinct, and what ended up being his winning proposal. Said Boyce, “I’m grateful to the Broad Foundation and thrilled for Duc. He’s a great scientist and has been fearless and entrepreneurial in pushing his research into the neuroscience realm. This award is a well-deserved honor for Duc and, I think, a shrewd move by the foundation to help bring a terrific early-career researcher into the neurodegeneration field. A perfectly timed win-win!”